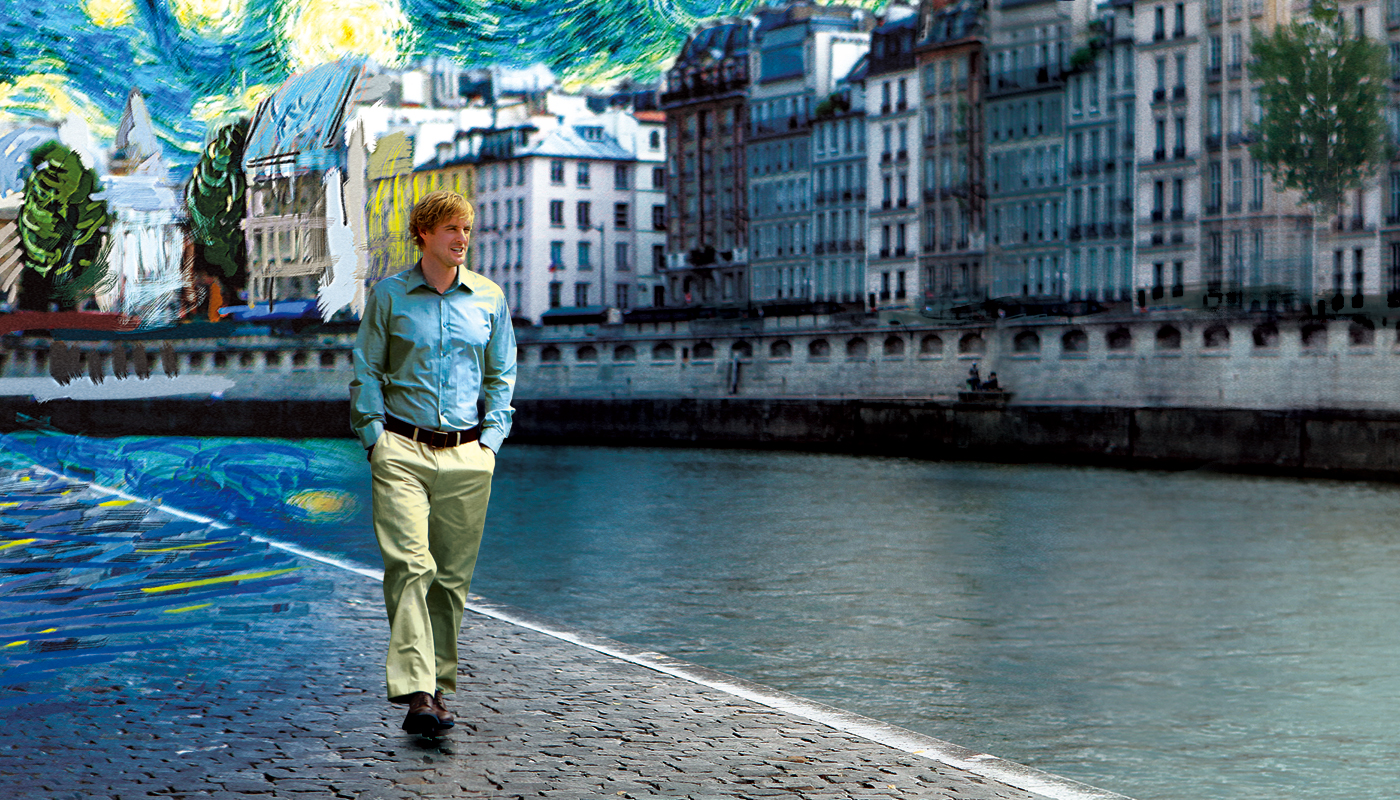 ”Nostalgia is denial, denial of the painful present.”

For reasons unknown to me, recently I’ve been interested with the so-called ”Lost Generation”. But more importantly, taking a particular interest in the lives of Ernest Hemingway and F. Scott Fitzgerald by watching as many documentaries as possible dedicated to them on Youtube. Still, I am far from an expert on the ”Lost Generation” and the two authors, but I can’t deny it’s been a lot on my mind lately. With that said, it isn’t hard to see that I’m completely in the mood for something like ”Midnight in Paris”. Midnight in Paris actually didn’t come into my radar during the film’s initial release. And, I’ve been aware of Woody Allen for some time. However, I’m not a serious fan of him since I only saw one film from him: Annie Hall and large parts of the mockumentary Zelig in an English class. I also happen to be a bit of a Francophile, so Midnight in Paris seemingly has all the right ingredients for me to enjoy it.

The allure of the past seems almost omnipresent in humans. Going to the Ancient Greeks with their tale of the 5 ages of men written by the poet Hesiod. According to Hesiod, in the first age of men, there was a ”Golden Age” inhabited by a literal race of golden-skinned men who lived long and there was a state of constant peace and harmony. Each of the subsequent ages was lessor to this Golden Age, and the state of humanity grew increasingly worse. So the current age of mankind was the worst one for Ancient Greeks. It appears for our Greek forebears; the present would always fall short of the Golden-age given how idyllic their vision of their Golden-age was. A trait we may like to scoff at without realizing we may be guilty of the same thing. For this is the story of Midnight in Paris, a man named Gil Pender in search of a golden age to find himself and purpose in the world. Gil’s Golden-age is the Paris of the 1920s, the site of the ”Lost Generation”; a Paris center of great creative talent and creative output. Gil is a man in a pivotal point in his life; he is engaged to be married soon, he has great success as a screenwriter but wants to be a great novelist, wants more out of life than a comfortable lifestyle and even intends to move to Paris. Such aspirations put Gil at odds with his overbearing fiancée Inez and her overbearing parents. A longing for the past is probably symbolized best in him writing a novel about a man running a ”nostalgia shop”. Throughout the film, Gil constantly says he wants to see Paris in the rain, something the others find completely dumb.

Gil through unexplained means gets to experience his desired ”Golden Age” when he gets transported back to the Paris of the 1920s. Like an unexpected pleasant dream, Gil’s time traveling adventures is everything he hopes for. The historical figures of the era he admires like Hemingway that he comes into contact with are less actual people, instead, an embodiment of the public perception of these people. For example, this movie’s Hemingway is a cocksure one who likes to quote himself in a very bombastic way; a portrayal of him that is a tribute to his famed bravado in the popular consciousness. Others are heightened versions of themselves as well though a few figures are so outrageous that there is little difference between their real life version and their ” heightened versions”, such as Salvador Dalí and maybe, Zelda Fitzgerald. Gil’s trip to his Golden-age is supposed to be a nostalgic one; these semi-distorted characters are a reflection of this.

Midnight in Paris’s visuals is romantically alluring. The entirety of this film maintains this picturesque look. The opening montages borders on the excessive with its overly glorious portrayal of Paris that looks like it was commissioned by the French board of tourism. For all of its possible pandering, the opening montages are rather a glimpse into Gil’s vision of Paris, a colorful city that can’t be matched in terms of splendor. According to Woody Allen himself, the film’s cinematography puts a greater focus on ”warm colors”. Warm color is colors associated with warmness such as red, orange or yellow. The focus on warm colors extends to the lighting too; a great majority of the lights in Midnight in Paris emit an amber glow, such as all of the lamps or street lights and some of the car lights do as well oddly enough. During some interior scenes, the amber glow reflects off the characters’ faces. A nuance more prevalent in the scenes set in the past; a nuance that suggests to me a character’s innate friendly warmness. The ambiance shares this friendly warmness as well. In all, the vivid aesthetics not only serve as eye candy but embody the themes of the film well.

There is a strange tint of ‘magical realism” in the picture because Gil’s time traveling exploits co-exist peacefully with the present world. And the manner the characters can time travel happens so seamlessly, that makes a time traveling appear like a natural event for both eras. The exact moment when they enter or leave the past is very elusive; the effects of time aren’t as apparent as you would expect. During certain occasions, characters from the 20s simply just stroll in with the same magical car that Gil time travels into our modern time for a brief moment without awareness of this strange paradox. Can’t speak for everyone but the longer the film went, the whole strangeness of the time traveling lessened for me. Such elements might seem strange to a typical movie goer at first, but it injects a certain whimsicalness.

A surreal adventure that is self-aware of its own absurdity; humor is on every corner of this surreal adventure. The comedy reaches it most surreal glory when Gil explains his predicament to a group of surrealist artists that includes the likes of Dali. Surrealists view time differently from most people, so none of the surrealists express the tiniest bit of dismay or disbelief at Gil’s confession. It’s a totally surreal moment that’s handled with such a great deadpan delivery.

Much of the character interactions is humorous in some ways. Like many of Woody Allen’s work, the wit of a high caliber. Less attentive towards just being crude, the humor takes a more self-deprecating approach. Making the humor in Midnight in Paris more charming in my view and what makes it so charming, because it is ultimately self-reflective. A feature common to all Woody Allen comedies.

Owen Wilson is an actor that is hit or mess with me. Some of the characters he portrays are annoying. For Midnight in Paris, Owens turns in a solid performance. Owens’ Gil still has the typical characteristics; we tend to associate with Owen. Those traits of his aren’t overblown here and even service the character. Gil is a vulnerable man with such a childlike curiosity for the Parisian lifestyle and his place in the world that always makes him quite endearing. Of course, many if not most of Woody Allen’s movies, the main character is basically an ”insert” of Woody Allen himself, Gil is no exception of this. Gil is an infusion of quirks from both actors, yet he works deviously well.

If Gil’s wondrous adventures do anything to him, it is that Gil gains a different outlook on life. Gil’s starry-eyed outlook doesn’t completely fade away but rather this outlook becomes less naive. For one, Gil cuts his ties with his nagging fiance when an ugly truth about her comes to light. People idealize the past to forget the problems of the present, the problems of the present unlike the problems of the past are too immediate for us to ignore. Imagining an idealized past allows us to cope with the uncertainty of the future and shortcomings of the present, a simple realization that’s Gil’s personal growth. Gil only realizes this the moment he faces someone like him whose mind is ”stuck in the past”. That’s someone is Gil’s French love interest: Adriana. Adriana’s present is Gil’s beloved 1920s, yet she doesn’t share Gil’s enthusiasm for the 1920s. Adriana’s golden-age is La Belle Epoque the age of Moulin Rouge. The first and final conversations between Gil and Adriana dramatically mirror each other. Those two conversations probably summed up the essence of the movie.

Gil realizes his desire to live in a so-called Golden Age was nothing but a way for him to escape the troubles of the present. Yet, by staying in his desired Golden-age for too long, the past Gil is living in will cease to be a ”Golden-age” for him. The mystique of the past Gil is living in will wear away, and that era’s shortcomings will come to light. Afterward, a person will naturally seek a new Golden-age to escape the troubles of the current ”past” a person living in. It’s a bad cycle born from the inability to accept our own present. Much like Hesiod’s tale, the search for a true ”Golden-age” keeps reclining until it reaches utterly mythical proportions that make it an impossibility. Simply put, a true Golden-age is impossible for humans to achieve. Although Adriana refuses to see this hopeless dilemma, however, the overthinking Gil does. Gil with the realization he can’t find happiness in the past, Gil tries to find happiness in the present. The present will always fall short because life itself cannot live up to our expectation. Yet, there is some pleasure in the face of this unpleasantness, much like being in Paris in the rain.

PS: While Midnight in Paris isn’t necessarily a deep film. Midnight in Paris wears its theme on its sleeve. I would argue its simplicity is what makes it so enjoyable. You don’t have to think too hard about its theme because it is presented to you in such a direct way. But there is so much profoundness in its central message that it makes Midnight in Paris more than  simply a ”feel-good” movie.

Midnight in Paris speaks to me more than a typical viewer of the film because I always had a fascination with history. I’m majoring in history it for crying out loud. As a student of history, I’m always aware that is a certain dark side to any period. But, I still can’t help to idealize the past at times.