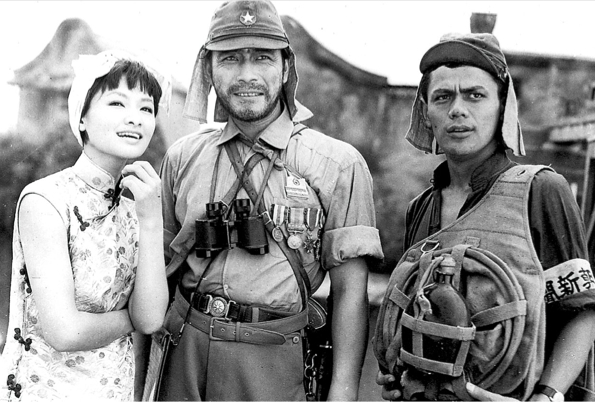 A soldier takes up the identity of a reporter to uncover the mystery behind the death of his younger brother.

A war film or a murder mystery? What is this film? It’s a swashbuckling fusion of both genres. Much like the unconventional men posted at Desperado Outpost, the film is idiosyncratic as all hell. At certain parts, the scenes seem lifted straight out of a Western. Sergeant Okubo working under the alias Araki is quite a quirky main hero. He’s a sleazy trickster of the Jack Sparrow variety but with a bit of a detective edge since he is chasing the truth. What’s most interesting about Okubo the wide reactions he provokes from other characters. It ranges from admiration between bemusement, and utter disdain. Okubo’s actor is also skilled at giving great facial expressions. Okubo has the strange quirk of sensing danger from an itchy palm. It’s a strange quirk that isn’t used much; I found it puzzling. But I suppose it adds a certain whimsicalness to his character.

Another intriguing element of the film is the portrayal of the Japanese Imperial Army. It’s certainly a far-cry from that would have been possible during the war. The Japanese Army here is closer to an army of rascals than to one of disciplined soldiers. It’s hard to say with certainty if there is intentional desire to satirize the Japanese army but the feeling is definitely there. Hell, there is a scene where some Japanese troops are happy they found an unconscious woman to rape without a trace of sympathy. Or a scene where Japanese troops sell their weapons stupidly to the enemy for food and drinks. The mixture of a wartime setting and a big dose of humor often leads to a movie with a dark sense of humor. And, Desperado Outpost is no exception. Desperado Outpost has a rather favorable portrayal of their Chinese adversary; no matter how sly they are, their honor as warriors is never in question. The true villains of the story are those in the Japanese army willing to use the army’s bureaucratic structure for their own ends. The Japanese’s willingness to make themselves a villain in a war film in China is like a sign; they are coming to terms they were the aggressors in their war with China.

The film isn’t heavy on political overtones, but there is an integrity to the film for its unflattering portrayal of the Japanese Imperial Army. Considering, the consensus is that Japan was one of the so-called bad guys during World War 2. Though, the picture resonates more like a western or a swashbuckling action film than a typical war film; it still has the high-stakes of a war film. Desperado Outpost has the beats of a murder mystery, yet much of the film still functions more like an action-comedy film. Though, many of the characters aren’t in the most favorable light; they still can be charming. The main villains of the story are in it from the start, but the film still manages to keep you guessing who are the true villains.

The final showdown involving the main villain is a clever play on the first interactions between the villain and the main character. The final battle may be to some a step out of line with the tone of the film; I still found it’s quite amusing in the manner that men of Desperado Outpost were willing to carry themselves. It was a great tribute to the self-deprecating nature of the men posted in Desperado Outpost. That’s what the Desperado Outpost is: a self-deprecating look at the Japanese army in Northern China. At the same time, it’s a peculiar war film that is an effective action and mystery film.