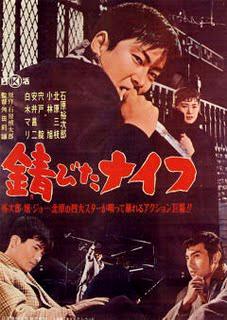 A former convict trying to leave his criminal past behind him is sought out by the police to act as a witness to put a powerful criminal behind bars.

Can society grant redemption to a former convict? Legally, it may be possible but the social stigma may haunt the former convict. Japan’s conformist culture only exacerbates the matter. Three men choose to leave their previous crime ridden lives. None are able to escape the burden that is their past. Death and the easy life sit so side by side that is hard not to get caught up in the criminal world again. The police are pursuing justice but the lack of a proper witness eludes them so justice remains out of reach.

Shimabara( played by the iconic Joe Shishido) is the first to fall but he lets his nearsighted goal of blackmailing the Yakuza get the best of him. Makoto Terada is the most naive of the three and whose obsession with youthful optimism could spell his own doom. Yukihiko Tachibana is arguably the protagonist and the most self-conscious of his criminal past. Tachibana is constantly haunted by guilt of his crime. That crime was, however, was an act of desperation in the name of a loved one. Tachibana’s actor is probably way too baby-faced to be taken seriously as a harden ex convict yet his child like the face is almost like an enduring testament of the good person trapped behind his dark past. The cast is larger than this of course, but the others serve as mere supporting characters. Keiko Nishida, the conspiracy behind her father’s death is the key to uncovering the truth behind the real mastermind. The way the narrative focuses on the police initially, it’s almost like they’re the ones set up to be the protagonists. However, the police are more arranged to be ancillary pieces of the backdrop. A moral force of good that is being restrained by an unseen force. This unseen force is the hidden mastermind pulling the strings.

Rusty Knife is a stylistically film noir from the fictional city created just for this film, Udaka, to the cinematic emphasis on tight corridors, back alleyways, low key lighting or just constant claustrophobic surroundings and placement. A chase scene on trucks does more than enough to be engaging. Much of Rusty Knife’s dramatic weight is placed upon the willingness of the characters to be witnesses rather than any suspenseful investigation. The role of the witness here doesn’t simply don’t seek to punish but also exemplifies a civic-minded virtue that Terada and Tachibana attain once they’re willing to become witnesses. A means of redemption to cleanse their criminal past. The incident that uncovers the true mastermind might be an anti-climatic happenstance. However, this odd contrivance feels well earned after Tachibana reveals he’s willing to commit himself to even martyrdom for the sake of justice. A moment that is a high point of thematic resonance and character development. The bitter climax even puts this idea of idealistic martyrdom to a harsh reality check as Tachibana realizes blind heroism can’t fix everything.

Rusty Knife is a no-nonsense film noir that highlights the power of civic virtue in the face of a festering criminal underworld.