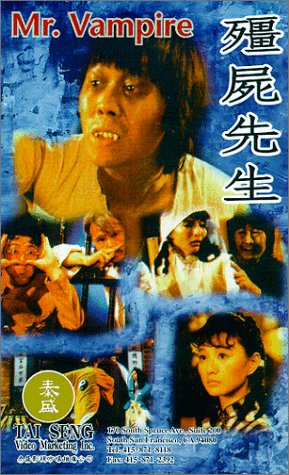 When a deadly vampire is unleashed after a reburial goes awry, a stoic-faced priest and his two clumsy sidekicks must put an end to the menace.

Hopping vampires and kung fu being a recipe for fun strike many as odd. Mr. Vampire is a delightful escapade of horror and action comedy that would spawn a minor franchise, and turn one of its lead star, Lam Ching-Ying, as Hong Kong’s goto vampire hunter. Mr. Vampire wasn’t the film that made killing vampires a subgenre in Hong Kong cinema, but it was definitely the one that catapulted that subgenre to a new kind of popularity.

Mr. Vampire does downplay its horror elements for the sake of comedy. Nevertheless, the tinge of horror that exists is still felt strongly in its depiction of vampires. The vampires look like ghastly corpses that can kill. The facial makeup is intricately detailed, and their odd jumpy movement is unsettling despite the comedic overtone. The female ghost whose appearance is probably totally unnecessary since she just creates a pointless subplot. She has a foreboding presence even though she mainly exists for sleazy antics. Mr. Vampire’s paranormal elements don’t appear to be self-conscious of its action-comedy elements. It is the utter sincerity in both of these styles that enables Mr. Vampire to be so fun. In short, Mr. Vampire gives its viewers the best of both worlds. The production designs look like they belong in a horror picture while it has beats of an action comedy.

Master Kau, the stoic-faced priest brings a sense of solemness to the whole ordeal. He single-handedly is able to pull this off. If there was no Master Kau, Mr. Vampire would have no gravitas or stakes. His solemnness is able to persuade us of the merits of the absurd rituals, he performs. Master Kau is the only counterforce to all of the levity,yet, it works. His two apprentices are worthy foils to Master Kau. Their high jinks take advantage of the odd fusion of horror and comedy well to deliver many moments of great fun. The three formed the backbone of Mr. Vampire’s quality, and the three execute many sequences of amazing choreography as well.

Mr. Vampire is a near perfect synthesis of horror and action comedy. It succeeds in its genre blending by capitalizing on the best elements of the two genres. An odd fusion that never ceases to be inventive fun.