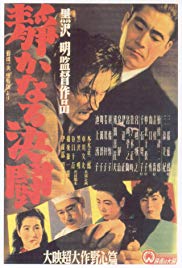 A doctor cuts himself during an operation then gets infected with syphilis when trying to save the life of another soldier. After the doctor returns home after the war, his life is unable to resume back to normal.

”No good deed goes unpunished” could be a tagline for The Quiet Duel, or even, the perfect line for Dr. Kyoji Fujisaki’s troubles. A man whose life was turned upside down because of a good deed. Merely four years after the end of World War 2 and the devastation of that war is still fresh on everyone’s’ mind. The Quiet Duel is a post-war-conscious drama in the vein of Drunken Angel or Stray Dog. In these works, Akira Kurosawa wonders how the Japanese people should deal with the post-war trauma that inflicts them. The rubble and debris from all of the devastation was already a daily reminder of the post-war trauma. But, even more so, than the physical destruction was the emotional turmoil that the war inflicted on the Japanese people.
The story of Dr. Kyoji Fujisaki is essentially an exploration of that dilemma facing Japan. It isn’t that hard to see syphilis as a metaphor of post-war trauma and post-war guilt haunting Japan. So, Kyoji dealing with that horrid disease is a larger metaphor of how the Japanese people can come to terms with their post-war trauma and post-war guilt. His story is one means of solace that Akira Kurosawa offers his viewers of 1949.

Kyoji Fujisaki is an honorable man dedicated to his duty of being a doctor. He’s the type of doctor very committed to the Hippocratic Oath in the worsts of times. Which ends up becoming a kind of curse, in a way. It’s an inverted version of karma that has cursed Kyoji, so to speak. Kyoji’s willingness to make sacrifices and his devotion to his profession even in such dire circumstances is inspiring. He’s a model of virtue. Kyoji’s virtuous nature might conjure up an image of an idealized figure. But, Kyoji is far from that. Since Kyoji’s moral strength also comes from his place of weakness, his humanity. Toshirō Mifune’s stunning performance that’s able to portray vulnerability and moral resolve, not as competing opposites, but complementary traits. Susumu Nakada is a worthy counterpoint to Kyoji in terms of temperament. Susumu’s selfishness and Kyoji’s selflessness form a solid basis of an intense character struggle that boils over in the climax. The title could be a reference to that struggle. The inner turmoil presented in both men that becomes an unstated rivalry . Or, in other words, a quiet duel. A type of dueling that isn’t about physical strength but moral strength.

Rui Minegishi is a nurse in training that has made bad life decisions. She’s a bit of an audience surrogate. She serves as an example of how Kyoji is able to uplift those around him. Her forlorn outlook on life getting reevaluated is surprisingly sentimental. Takashi Shimura playing Kyoji’s father, Konosuke Fujisaki doesn’t get to do much. But, his presence is always a plus if Toshirō Mifune is involved in a picture. Misao Matsumoto, Kyoji’s fiance, her role being not as fleshed out could be a weakness although the focus of the story leaves her little room, anyway.

The Quiet Duel is a humanist drama about how one can react to the ravages of war even if the pain is the result of a freak accident. Akira Kurosawa’s cinematic parable how a person down on their luck can rise above their lot in life through moral forthrightness.