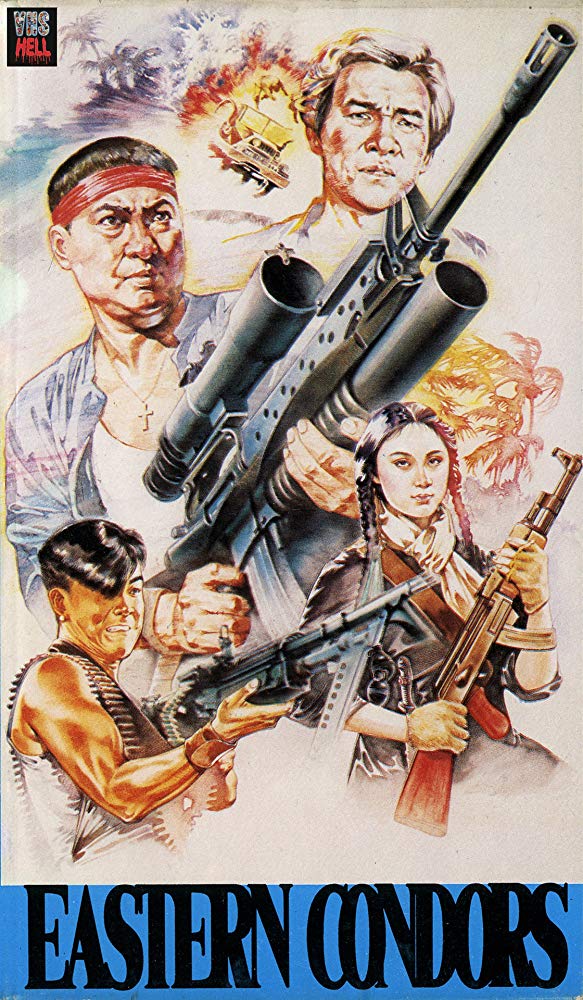 A group of Chinese immigrants are sent on a suicide mission to destroy a secret cache of weapons left over in Vietnam by the American government.

Sammo Hung’s Eastern Condors was an endeavor that led him to lose 30 pounds. Its production also prevented Sammo Hung and Yuen Biao from participating in Jackie Chan’s underrated sequel to Project A. In the 80s, the Philippines served as the perfect metaphorical ”Vietnam” for tons of war flicks. Eastern Condors follows this trend.

Sammo Hung definitely takes inspiration from Dirty Dozens. There’s a motley crew of conflicting personalities thrust into a warzone to do a thankless job. However, the ensemble cast is the weakest aspect of Eastern Condors since the characters are never properly developed or given enough distinguishable traits. Their deaths serve more of an excuse for emotional outbursts. It’s hardly a bight on what Eastern Condors attempts to do. Which is more to be more of an action-comedy romp under the guise of a war film. There is no doubt that there is a sense of missed opportunity considering the talent involved such as the likes of the late Haing S. Ngor and Yuen Woo-ping. Eastern Condors does fall into too much swashbuckling that infused with its heroic-bloodshed inspired gun-play does render the severity of its war time setting kind of moot. Yet, the utter chaotic fury of war remains intact because of the unrelenting treatment of its heroes. Sammo Hung’s answer to the weak character building is to give Eastern Condors fast pacing that is constantly putting its colorful cast under interesting scenarios and set pieces. And, it does work since I was never bored. Action of Eastern Condors draws upon the intensity of war that is then crafted with the amazing choreography that Sammo Hung is known for. Since slapstick is virtually non-existent, the choreography is naturally more gritty.

In Eastern Condors, the Communist troops are the ones on the receiving end of guerrilla tactics. A complete inverse of the usual which does put a more unique spin on things. It makes you wonder if this was done out of some kind of anti-Communist personal conviction from someone involved in the production or just a mere coincidence. Like the fight scenes that precede it, the finale mixes the intensity of war and martial arts. Although, it is arguable, if it is a harmonious mix. The spectacle of it does leave you wanting a bit more since you expect the bigger spectacle to match the high stakes that war usually entails.

Sammo Hung’s delirious version of The Dirty Dozen that’s fun and is driven by the high points of Hong Kong action cinema.