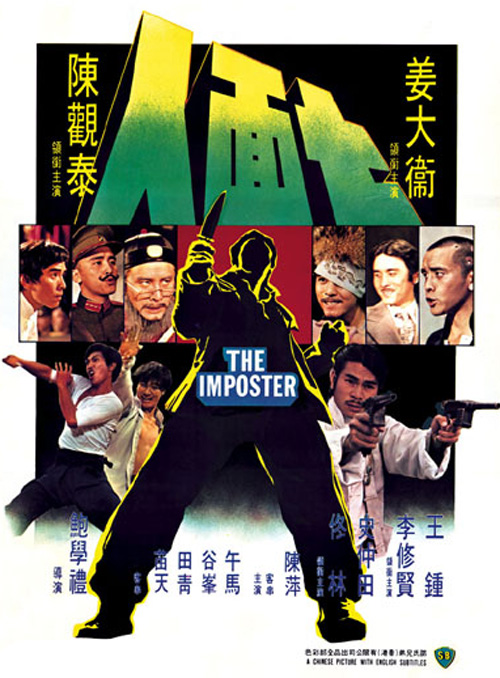 A clever trickster comes to the aid of a man whose brother is wrongly jailed for a murdering a family and committing a robbery.

David Chiang in the early to mid-70s was on a roll. Under Chang Chen and sometimes not under, Chang Chen, he produced many classics of the wuxia genre in the 70s. Although, The Imposter hardly comes close to being David Chaing’s famous work, it is still a unique work in his career that has David undertaking a quite different role than usual. The Imposter is not a psychological thriller but it does borrow the genre’s focus on mind games. It features much less bloodletting and there is more of a fixation on winning the battle of wits. Unraveling a conspiracy through manipulation is what drives The Imposter.

Ge Liang is a master of disguise. He’s able to fool everyone around him into thinking that he is several different people.His disguises are probably less convincing than a modern day Instagram filter. Ge Liang takes a page from Clark Kent when he adopts the same type of logic to make himself inconspicuous. A few changes in his wardrobe selection and changing his mannerisms are more than enough to ”transform” him to a different person.

David Chiang gets to flaunt his acting since Chiang has to portray different personas. Chiang effortlessly shifts persona to persona. In a way, The Imposter is a one-man show. Chiang, the star, being nearly the impetus that drives much of the story after he agrees to help Tseng Kan. David Chiang as the master trickster, Ge Liang, manipulates everyone he comes across to set his plans into motion. On occasions, it is hard to believe how easily he can trick others. Which ends up feeling like the Ge Liang is the only truly active character in the story. That could also make the villains less imposing as well. Even if the story relies upon everyone being simply Ge Liang’s puppet and pawn, The Imposter’s story is still fun because of how Ge Liang plays the puppet master is enjoyable to see unfold. However, Ge Liang’s strings are too strong for their own good as none of his adversaries measure up.

The Imposter is a fun adventure in face-swapping and manipulation. It is carried on the back of David Chiang’s great ability to be a cunning trickster. Sadly, the story isn’t as cunning as Ge Liang.